Someone will have to do the actual math (and I don’t doubt that someone will), but if Shang-Chi and the Legend of the Ten Rings isn’t the most action-oriented movie of the Marvel Cinematic Universe thus far — purely in terms of ratio of time spent watching people beat each other up to time spent vamping in the interim — it has to rank somewhere near the top. This is saying a lot for a movie that does have a hefty dose of backstory to plow through, being a cross-generational, culture-forward origin story and family drama — a narrative with heavy lifts on the exposition front and a heap of traps to avoid on the cultural front.

But this is also as it should be. I do actually go to an Iron Man movie wanting to see Robert Downey Jr. be a wise-ass for two hours; if he has to do it from behind a mask for a few scenes, so be it. Put the likes of Michelle Yeoh and Tony Leung in a movie, on the other hand, and attach it to a kung-fu superhero, and my needs adjust accordingly. The promise of Shang-Chi, which is as much martial-arts movie as it is standard superhero origin fare, is that a lot of people will get their asses kicked: sometimes gracefully, even beautifully, and other times with the battering-ram power you can expect of a movie advertising 10 rings at play. (Frodo just had the one, and it was enough of a pain in the ass.)

Inevitably, someone wants to unleash great evil upon the world, and someone else wakes up one day to realize that it’s his fate, responsibility, and chore to be the guy who stops the other guy. The success of Shang-Chi and the Legend of the Ten Rings, which was directed by indie filmmaker Destin Daniel Cretton (Short Term 12), is that it manages to do everything expected of it: set up a new and, for many, not terribly familiar (or, because of dated stereotypes, not always fondly remembered) superhero; break free of those aforementioned stereotypes by giving the cultural legacies at its center a little weight; satisfy audiences so used to the usual hero-journey theatrics of origin stories that phoning it in with “the usual” just won’t cut it anymore. And it accomplishes all of this efficiently and effectively enough that we indeed spend most of our time watching people duke it out on the sides of skyscrapers, in underground fighting rings, on San Francisco public transit, and elsewhere. It’s a good movie. It’s got a plausibly fearsome villain by way of Leung, a nice ensemble of heroic personalities (played by Simu Liu, Meng’er Zhang, Yeoh — even Awkwafina gets in a good kill when it counts), and a dose of actually-poignant family drama undergirding all the rest. The rest — a forest maze that collapses in on people, dragons, souls getting sucked out of bodies, roles for women that are more than the standard gender-flipping lip-service — is a cherry on top.

It’s probably best to leave the intricacies of the life of Xu Shang-Chi (Liu) to the movie. Suffice it to say he and his sister, Xu Xialing (Zhang), descend from a legacy of power and myth. In one corner, there’s their mother, Ying Li (Fala Chen), guardian of the hidden village Ta Lo, which, buried in deep in a forest, happens to be all that stands between humanity and its imminent destruction. In the other corner: their father, Xu Wenwu (Leung), a centuries-old warrior who, empowered by a mythical set of bangles known as the Ten Rings, has been able to hoard money and power, fucking around with governments, building his own army and the like, for years and years. He can’t be defeated. Then he sets out to find Ta Lo, the last frontier for a man who has everything. There, he meets Mom. And, in one of the movie’s most pleasurable scenes — a leaf-strewn bit of pleasing wuxia fighting intercut with “I think I’m in love with this woman” close-ups — he gets his ass handed to him for the first time in centuries.

Fast-forward to the present. Bad things have happened. Wenwu, who’d set aside his Ten Rings for love — which entails becoming mortal — has been given good reason to traipse back over to the dark side. And the kids that the couple had in the meantime, Shang-Chi (Shaun, to friends) and Xialing, have grown into masterful warriors in their own right — the young man because his father saw him as the direct heir to the Ten Rings, the young woman because her father’s lack of interest became, in a skewed way, an opportunity to train herself. And fend for herself. When we meet adult Shaun, he’s a hotel valet in San Fran pretending to be a normal guy, working alongside his girlfriend, Katy (Awkwafina), and contentedly failing to make anything of himself. Xialing, meanwhile, runs a fighting ring in Macau. The siblings are estranged.

Things are not allowed to remain that way, of course. Fates must be confronted. Legacies wrestled with at long last. Part of the fun of Shang-Chi is that it goes through these motions with an actual sense of interest in them. The obvious setup of the thwarted daughter, the never-heir, finally getting to have her say doesn’t just end there; it becomes a way of exploring an entire maternal legacy akin to its own equally powerful way of being and fighting. The bad-dad routine — unusually compelling, thanks to Leung — grows more menacing with time, gnawing at Shang-Chi’s sense of who he can even become given the things he’s done and seen.

I had a blast watching Shang-Chi, which arrived exclusively in theaters on Friday, September 3, and I spent most of the time after my screening wishing for more. It could have been longer. Maybe there’s a director’s cut. Or, maybe this is the darned good launch of an entirely new film franchise, and this film is merely meant to set up the even more fully rounded sequel(s). Whatever the case, that’s a decidedly better way to leave theaters than being bored, annoyed, or otherwise shaken out of a good moviegoing experience by bad writing, acting, and directing decisions.

Shang-Chi seems driven by an apparent top-down directive to fortify a new class of mystical superheroes while sticking to Marvel’s guns of inclusion and fully rounded character development. The result is good news for anyone looking for a mix of refreshing surprises and comfort food in their superhero tentpole films. Plus, this superhero big screen debut delivers enough “holy whoa” moments to make any viewer feel like a kid again.

In terms of cinematic transformations from the comics, Shang-Chi‘s is more severe than other Marvel Cinematic Universe characters. Instead of loudly aping all things Bruce Lee, like the character’s original 1970s ink-and-paper version, today’s Shang-Chi (played by Simu Liu, Kim’s Convenience) dances between straightforward Chinese martial arts and the ancient, barely understood powers of a series of magical rings, meant to be worn five on each arm. (The film also punts much of the comic series’ Fu Manchu lineage, in ways that nobody new to the series would ever notice.)

The character Shang-Chi begins his film nowhere near said rings, thanks to his father controlling them. At the outset, Shang-Chi rejects his powerful origins, so much so that we get to know him as a mild-mannered car valet who does not sneak out at night to fight crime. It’s at this job in modern-day San Francisco that he pals around with party-loving Katy (played by Awkwafina, The Farewell), who catches flak from her family for falling short of high expectations.

A chance encounter pulls Shang-Chi right back into his family’s business, though. Katy, flabbergasted to find out that her valet buddy has been a secret martial arts dynamo the whole time, insists on being part of the ride. And that leads the duo across the world—and beyond. 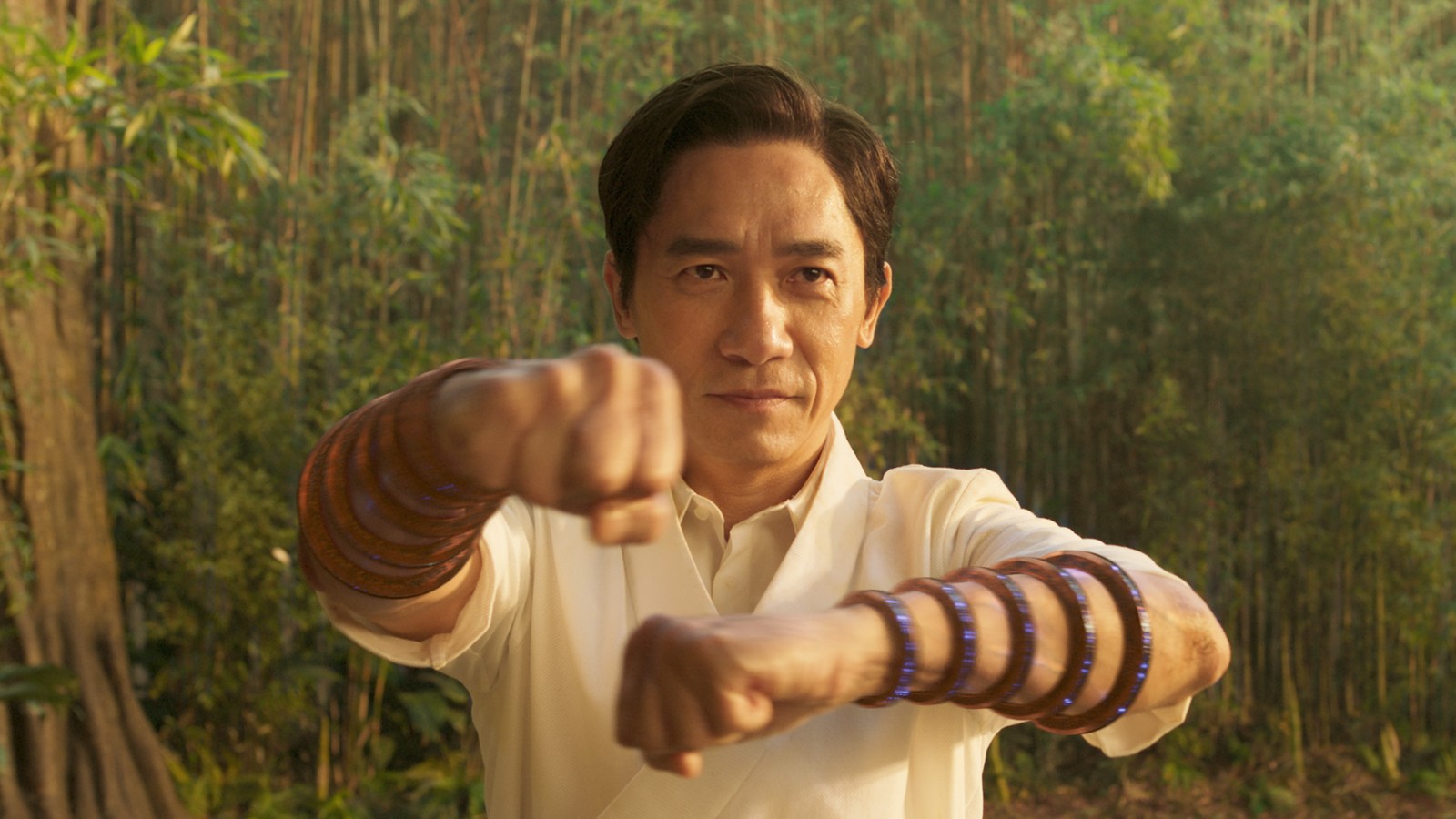 That brief, spoiler-free summary tiptoes around the family drama you can expect from Shang-Chi, but suffice it to say that the film’s heart beats its loudest and fullest when mother and father figure heavily into this hero’s story. In particular, Tony Chiu-Wai Leung (Chungking Express, The Grandmaster) brings his legendary film career to bear in his turn as one of the most hypnotizing personalities ever seen in a modern Marvel film. “Villain” doesn’t do his performance justice.

There’s truly no greater kryptonite to a powerful hero than disenchantment with a parent—or a child, for that matter—and Leung is fascinating here as a brooding-yet-loyal father. Leung’s performance hums with the slow burn of a father for whom nothing is ever good enough, and he radiates an unforgettably condescending aura, off which his co-stars feed ravenously.

Sometimes, a film can drag while trying to reflect characters’ cultural origins, yet Shang-Chi benefits from its own emphasis. Katy, Shang-Chi, and his sister Xialing (Meng’er Zhang) each grapple with Chinese family expectations that run counter to how they live their lives, whether in America or abroad. Yet director and co-writer Destin Daniel Cretton (The Glass Castle) is careful not to tie those issues up with cute, family-friendly bows. Shang-Chi in particular takes his conflict with his father to the very end of the film, stumbling and revolting at all turns, and it adds a rare heft to a Marvel film’s central conflict. Awkwafina is clearly here to chew scenery with comic relief, yet even her workload is tasteful here—and her character gets a development payoff by film’s end, to boot.

Sadly, the film misses a few opportunities to buttress its characters’ inspirations and origin stories. I would have savored another 5-10 minutes of Wenwu and Shang-Chi’s fraught relationship on the screen, if only because we only begin to see Simu Liu come into his own as a titular star at the very end of this duo’s screen time. And the family matriarch (Fala Chen, The Undoing) seems to have her on-screen time cut a bit too short, mostly because of how handily her performance neutralizes the character of Wenwu. Also, if you’re forcing me to keep score, Zhang’s turn as Xialing is shortchanged by the script, as the character has little to do beyond brood in her brother’s shadow—not a dealbreaker, but worth noting.

Still, the overall quality of the film’s plot and human connections is quite high, and from that foundation, Shang-Chi launches some seriously memorable action sequences.

At their best, Shang-Chi’s fight scenes toy with visual expectations in ways that emulate some of modern Chinese cinema’s finest. One character commands the wind in sync with their motions—giddily recalling and building upon the aerial wonder of Crouching Tiger Hidden Dragon. Another trades brutal blows inside of a high-speed bus, and the resulting brutality feels like a PG-13, Disney version of Police Story. Still another sequence decides that the construction catwalks on the edge of a skyscraper are a good place to flip between wooden planks on multiple levels and kick the crap out of anything that moves; it’s a scene paying homage in both humor and bombast to the directorial likes of Stephen Chow.

That list doesn’t even touch upon the film’s massive, climactic fight, which explodes thanks to a frantic ring-on-ring melee light show. It only gets bigger from there.

Good butt-kickings with a strong family foundation, whether that family is unified or dysfunctional: Shang-Chi nails this idea in ways that are truly unique to the superhero film canon. Quite frankly, I can’t think of other Chinese martial arts films that mix family chaos, beautifully staged action, and a new hero’s fantastical origin story this impeccably, either. Shang-Chi is exactly the blast I was hoping for ahead of next year’s massive Dr. Strange in the Multiverse of Madness. Dare I let one good Marvel film make me optimistic about next year’s oft-hyped, cameo-filled series-synergy extravaganza?