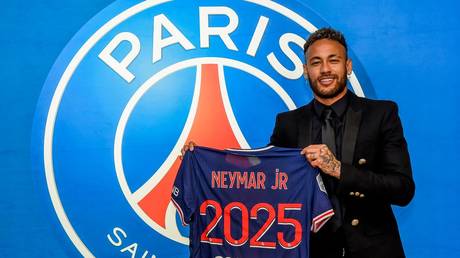 PSG have confirmed that Brazilian superstar Neymar has signed a new contract with them until 2025. Closing the door on a return to Barcelona, the number 10 will allegedly receive a huge bonus if he wins the Champions League.

L’Equipe broke news of the development on Friday and reported that the world record signing, who cost PSG $263 million in 2017 when they activated his release clause, was close to agreeing fresh terms.

Transfer market expert Fabrizio Romano then went on Twitter Saturday morning to write that a new bumper contract until 2026 was a done deal.

But in the hours following the claim, the club themselves released a short clip with the hashtag #Neymar2025 suggesting a slightly shorter stay.

Neymar: “It’s a great pleasure to extend the adventure at PSG as I’m very happy in Paris. It is a real pride to be part of this team. Here I grew up as a person, as a human being and as a player. So I’m very happy to extend and I hope to win a lot more trophies here”. 🇧🇷🚨 #PSGpic.twitter.com/WFCdbP3zPg

“It’s a great pleasure to extend the adventure at PSG as I’m very happy in Paris,” Neymar said.

“It is a real pride to be part of this team.”

“Here I grew up as a person, as a human being and as a player. So I’m very happy to extend and I hope to win a lot more trophies here,” he concluded.

Irrespective of which year he becomes a free agent, Neymar’s future is now officially-decided and will no doubt put fans minds’ at rest following a catastrophic exit from the Champions League.

On Tuesday, PSG lost 2-0 to Manchester City at the Etihad thanks to a double from Riyadh Mahrez, with Neymar singled out for criticism by local press in the aftermath of a 4-1 semifinal aggregate loss.

🗣 Riyad Mahrez: “I saw Neymar defend a lot, Mbappe also in the first leg. “I think we were a little better than the Parisians overall. We did not qualify simply because two players defended less.” [L’Equipe] pic.twitter.com/ErGlpjMl9O

Given a 3/10 rating by the mentioned magazine, and 2/10 by the Ballon d’Or-awarding France football who asked him if his display was a “joke”, Le Parisien ran a “Neymar: A genius without ideas” headline which echoed the thoughts of ex-PSG player and pundit Jerome Rothen.

“He’s a genius, okay, I’m the first to say it, but when he’s in that frame of mind, losing one out of every two balls, and when he doesn’t try hard for the team and blames a young player like [Mitchel] Bakker, who could have played his best half of football in a PSG shirt, that’s unacceptable,” Rothen scathed to RMC Sport.

“We expected more and I am the first to criticize him, but you can’t just criticize Neymar. The club want to renew his contract, but I think they need to rethink it.

“When he plays badly like today you have to tell him. The sporting director [Leonardo] is flattering him by talking about a contract renewal,” he concluded.

As the two parties evidently pressed on with negotiations, it seems little mind was paid to Rothen’s words.

This morning, Neymar finally inked a new deal that will keep him at the Parc des Princes while receiving a whopping $36.5 million per year, according to Romano.

As the Brazil international is now 29, completing the full length of the contract, which runs until 2025 when he would be 33, most probably shuts the door on a return to Barca.

In recent weeks, reports had claimed that Neymar was holding out on committing to PSG until new FCB president Joan Laporta had prepared an offer for him, and was even willing to lower his salary demands.

Cash-strapped and banking on both player sales and the fruition of the failed European Super League to make big signings, however, any potential reunion was a pipe dream.

The Catalans can now focus on landing Erling Haaland then, who won’t be cheap either from Borussia Dortmund, plus getting Lionel Messi to agree to two more years with an additional 12 months optional before heading to the United States and returning one day in a director’s role.


Neymar has made no secret of a desire to link up with with Messi once more and made his feelings clear following a 3-1 win over Manchester United in the Champions League in December.

“What I want most is to play with [Messi] again, to be able to enjoy being on the pitch with him again,” Neymar said.

“He could play in my place. He won’t have any problems, I’m sure. I want to play with him again and I’m sure that, next season, we have to do it.”

Barca fans may fear today’s developments mean any reunion between the South Americans will happen in the French capital and not its Catalonia counterpart.

Yet Leonardo could be encouraged to prepare another offer for the Argentine, while simultaneously assembling a package that stops Kylian Mbappe heading to Real Madrid in summer 2022 free of charge.