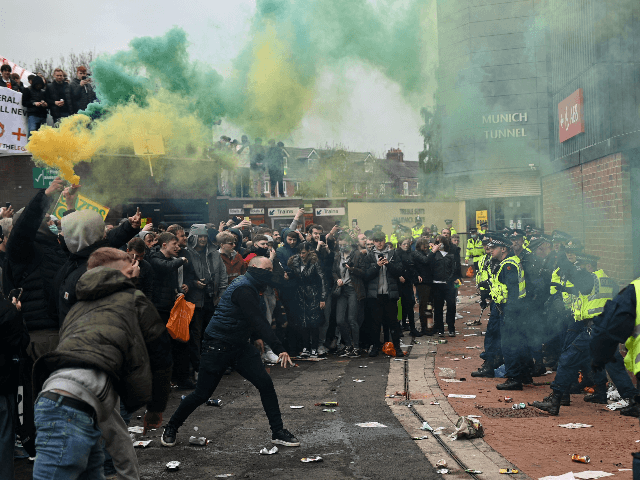 MANCHESTER, England (AP) – In an unprecedented moment for the world’s richest soccer competition, the Premier League was forced to abandon one of the biggest matches of the season after an invasion of Old Trafford by Manchester United fans.

The storming of the stadium – shut to fans during the pandemic – came hours before United was due to host Liverpool. As fans protested on the field against United’s owners – the Glazer family – flares were set off and thousands more supporters filled the concourse outside Old Trafford.

Ugly scenes erupted as police clashed with supporters who are enraged by 16 years of lack of engagement by the Glazers which peaked with their decision to take United into a breakaway European Super League which collapsed two weeks ago inside 48 hours.

The players didn’t even attempt to make it to the stadium, with United’s squad unable to leave its central Manchester hotel due to another outbreak of protests.

Video I shot outside Old Trafford earlier. It starts with clashes between fans and police pic.twitter.com/C4ZT2VUHZ2

The Manchester United Supporters’ Trust raised the possibility of a gate being opened to let fans enter the stadium. The only communication from the club was via an unnamed statement rather than the Glazers.

“We completely acknowledge the right to free expression and peaceful protest,” United said. “However, we regret the disruption to the team and actions which put other fans, staff, and the police in danger.”

The protesters only dispersed after a baton charge by police but the Premier League determined the “dangerous situation that should have no place in football” meant the game couldn’t go ahead. A victory for deposed champion Liverpool over second-place United would have clinched the title for Manchester City.

There have been smaller protests at Arsenal and Tottenham since those clubs were part of the six English clubs who tried to join the breakaway European competition.

But there was no significant anger in north London before Tottenham played Sheffield United, winning 4-0 after Gareth Bale scored a hat trick and Son Heung-min also netted to take the team fifth.

Arsenal was playing away at Newcastle, with goals from Mohamed Elneny and Pierre-Emerick Aubameyang clinching a 2-0 win that took the team ninth.

Incredible scenes at Old Trafford. Man Utd fans stormed into the pitch earlier, whilst protests also took place outside of the Lowry Hotel, which acts as United’s pre-match team base.

We will keep you updated on the status of the game! #StadiumAstro pic.twitter.com/j4L5rBhFPR