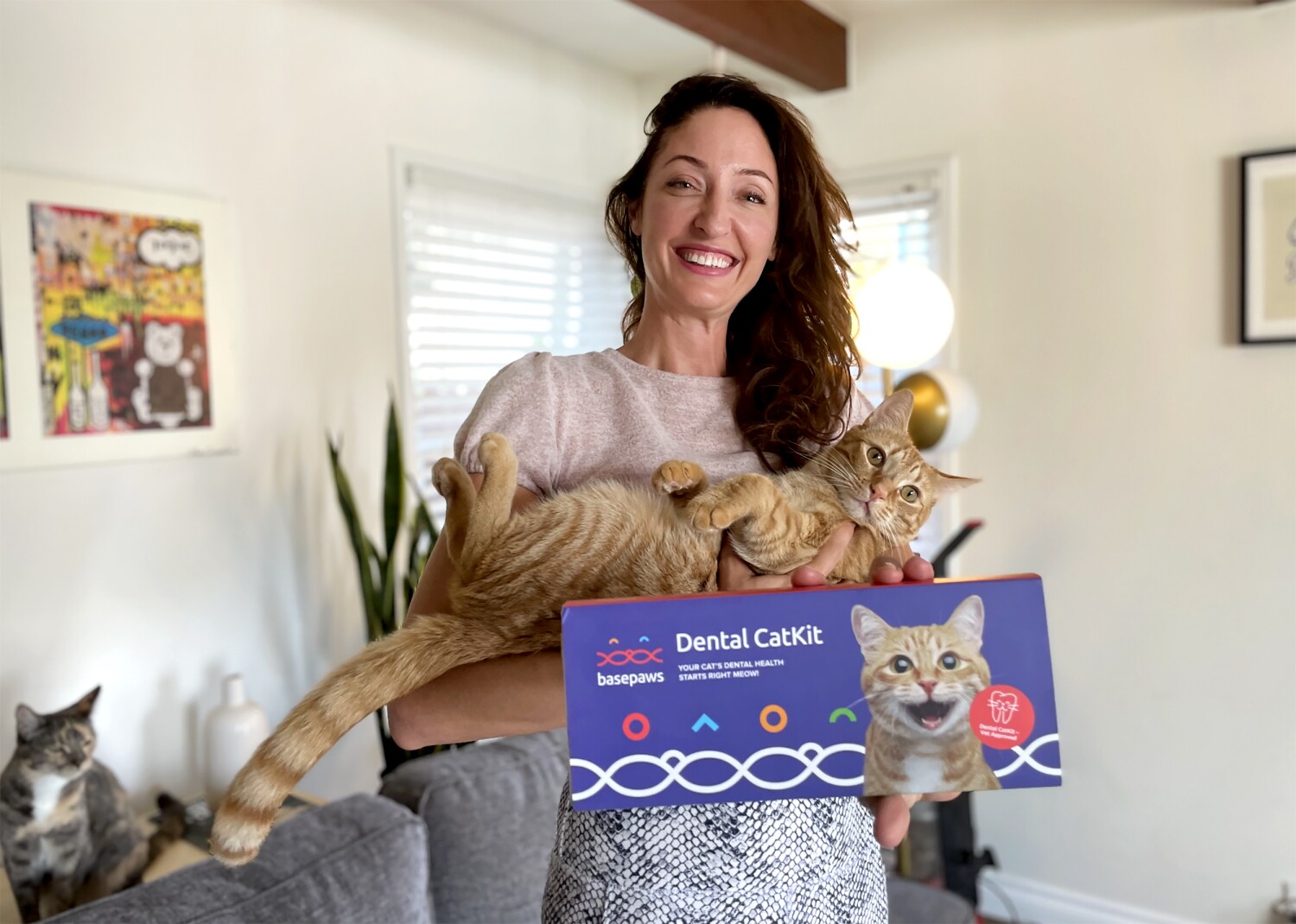 The company is rolling out a $70 “at-home, preventative dental test” that it says “analyzes more than 600 microbes in a cat’s mouth, looking for disease signatures before they become visible to the naked eye.”

This first-of-its-kind genetic test follows Basepaws’ $129 home DNA test for your cat’s genealogy, which was introduced several years ago.

“Our pets can’t talk,” Anna Skaya, the company’s chief executive and founder, told me. “Genetic testing is one of the only things you can do to understand your pet better.”

We have two rescue cats in our home, although one of them, as my Twitter friends know, thinks he’s a dog.

Pets can’t talk, true. But they certainly communicate with their human servants. Dogs are better at this than cats, in my opinion. They’re more expressive and, I’d argue, more emotional.

But cats also get their point across. When they’re feeling poorly, they frequently lose their appetite. They sulk around the house or disappear under the bed or into a closet.

In other words, they make it plain something’s wrong.

So the question to be asked about Basepaws’ at-home teeth test — which involves swabbing your cat’s mouth and sending in the swab for laboratory analysis — is whether you gain meaningful insights from all those microbes.

“You probably don’t brush your cat’s teeth every day,” she said.

I don’t know a single cat owner who does, myself included. If that makes me a bad person, so be it.

“Genetic testing,” Skaya said, “is a door that will change the way you talk to your vet about your cat.”

OK, I get that. If you have test results for a mouthful of microbes, you will indeed be in a position to ask your vet what this or that data point means. As Skaya says, “This keeps you ahead of any problems.”

But that assumes the test actually produces worthwhile results.

I reached out to a number of specialists in veterinary dentistry. I shared with them Basepaws’ news release announcing the dental test kit.

Not one said they were convinced the product was worth the money.

Santiago Peralta, an associate professor of dentistry and oral surgery at Cornell University’s College of Veterinary Medicine, said Basepaws’ claims made “very little or no scientific or medical sense to me.”

“The information suggests that the people behind the product do not comprehend the clinical or mechanistic features of periodontal disease, or of the other dental disorders that frequently affect cats and other species,” he told me.

Jason Soukup, a clinical professor at the University of Wisconsin-Madison’s School of Veterinary Medicine, said Basepaws’ test “could be too heavily relied upon, very easily misinterpreted and lead to unsupported recommendations for care.”

“I do not think there is enough data” to support the company’s claims, said Stephanie Goldschmidt, an assistant professor of veterinary medicine at the University of Minnesota.

Basepaws’ Skaya countered that her company’s teeth test had been reviewed by veterinarians. It works as advertised, she said.

Skaya shared with me a paper submitted to the Journal of Veterinary Dentistry that hadn’t yet been peer reviewed.

“The field of oral microbiome research in companion animals has received little focus and it is still in its infancy,” the paper’s authors acknowledge.

They admit they’re working with limited data. Even so, they conclude that the Basepaws test “has the potential to facilitate diagnosis of early stage dental diseases.”

That’s not exactly a ringing endorsement. But it does at least raise the possibility there’s scientific merit to the swab-and-see approach to feline dental care.

Nevertheless, a 2018 study in the journal Genetics in Medicine found that as much as 40% of findings in home DNA tests for humans indicating a risk of disease turned out to be false positives — which is to say, they were wrong.

Also, be super careful when sticking your hands anywhere near a cat’s mouth. I spent a week in the hospital after a cat bit me, resulting in nearly $55,000 in medical bills. Kitty microbes, it turns out, can be toxic. And expensive.

Yet I bravely tried the Basepaws teeth test on Jupiter, one of our cats, who was amenable to having the inside of his cheek swabbed only because I caught him during a power nap. I’ll post the results on Twitter in a few weeks.

As for Basepaws’ home DNA test for delving into your cat’s genealogical history, take all such findings with a grain of salt.

I’ve done DNA tests (not from Basepaws) on myself and my dog. Apparently I’m 11.3% Scandinavian, 7.8% Spanish or Portuguese, and 3.1% Italian — all of which was news to my parents, who are aware of no such ancestry.

My rescue dog Teddy’s genetic cup is supposedly brimming with Saint Bernard DNA. Maybe if you squint, but I’m not so sure.

Sheldon Krimsky, a professor in the Department of Urban and Environmental Policy and Planning at Tufts University and author of a number of books on genetics, told me it was best to think of ancestry tests “more as a recreational activity.”

That is, they may be more fun than fact. Like your horoscope in the newspaper.

Also, and I’m not sure why exactly, I find it more interesting to look under the hood of a dog’s DNA than a cat’s. A dog, like a person, can be the sum of many parts. A cat is a cat. And I mean that in the nicest possible way.

In any case, I think Skaya is probably right when she says “at-home products are a big part of the future of pet healthcare.”

I’m just not sure we’re there yet.