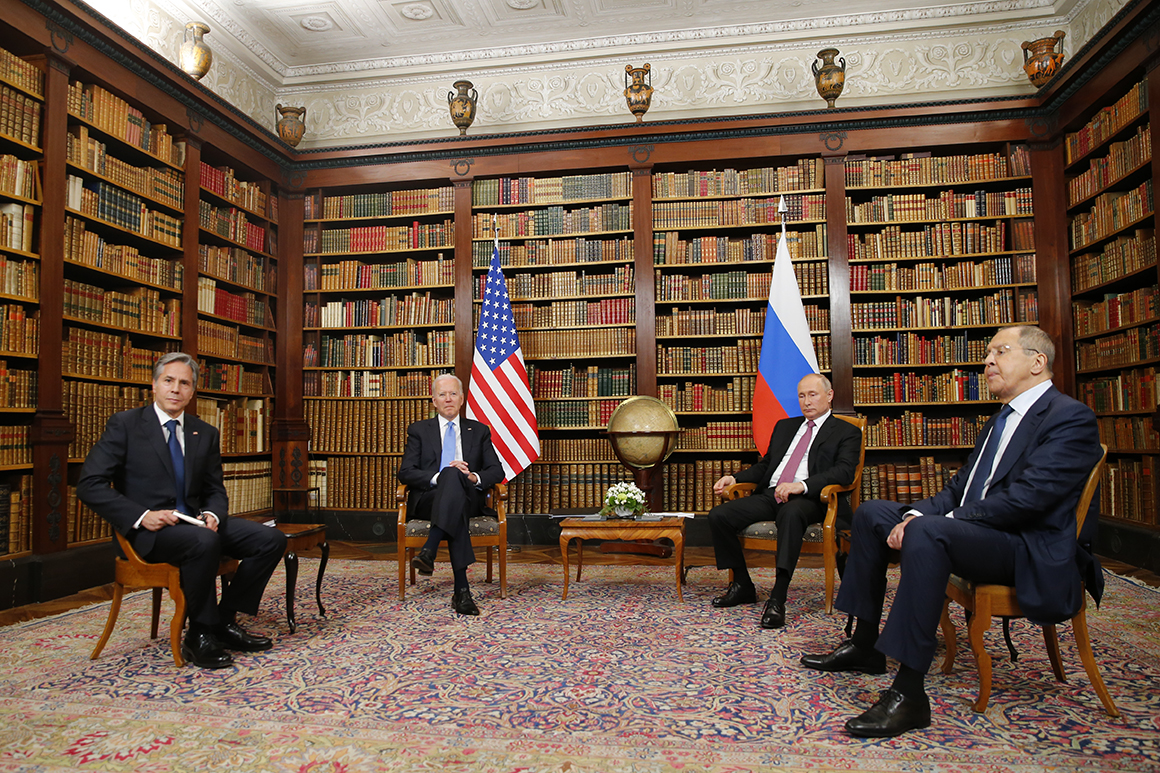 Secretary of State Antony Blinken took notes — it wasn’t quite clear on what — as Foreign Minister Sergey Lavrov sat across from him looking bored, as is his way.

Putin thanked Biden for his initiative in their meeting. “I know that you have had a long trip, a lot of work,” he said. “Nevertheless, many issues have accumulated in Russian-American relations that require discussion at the highest level, and I hope our meeting will be productive.”

Biden returned the thanks, and said: “It’s always better to meet face to face.”

If Biden was relaxed, so it seems was the White House press operation. The Kremlin quickly published a transcript of the two leaders’ opening remarks, but there was no immediate way to verify it with White House officials.

Among the leaders, the scene in a library at the start of hours of talks was sober and cordial enough — offering little body language to interpret, and just a scant few words.

But as the leaders settled in, a melee nearly broke out among reporters and photographers. Journalists pushed and shoved, yelling at each other to move but no one did. After just a minute or two, Russian security pulled the red rope separating the media from the leaders back to try to keep them away from the presidents.

Russian security hollered at journalists to get out and began pushing them — a common tactic in Russia where the media is routinely rough-handed. Journalists and White House officials hollered back that the Russian security should keep their hands off the press — touching is generally verboten in the U.S. In the confusion, some reporters nearly fell to the ground.

The road to the U.S.-Russia summit was similarly ugly.

It was hard to imagine relations between Washington and Moscow could possibly get worse than the moment in December 2012 when Vladimir Putin signed a law banning Americans from adopting Russian orphans.

Suddenly, innocent children were being held hostage — literally, in group homes — in retaliation for U.S. President Barack Obama signing the Magnitsky Act, a law cracking down on human rights abuses in Russia.

But over the next few years, relations indeed got worse — much worse.

In 2014, Russia invaded and annexed Crimea, after accusing the U.S., falsely, of fomenting revolution in Ukraine. In 2016, Russia stuck its cyber-fingers into the U.S. presidential election, stirring chaos and hoping to tilt the outcome against Hillary Clinton, much despised in the Kremlin from her days as Obama’s secretary of state.

The election of Donald Trump and his efforts to forge a bond with Putin, siding with the Russian president over the U.S. intelligence services, for example, at their summit in Helsinki in July 2018, only soured relations further. And that was followed by the attempted assassination in the U.K. of Sergei Skripal, a former Russian military intelligence officer, and a similar attempted poisoning of the Russian opposition figure Alexei Navalny.

Navalny recovered only to be arrested on his return to Russia and sentenced to more than two years in prison for allegedly violating parole while in Germany for medical treatment that Putin himself had authorized.

By April of this year, the countries’ respective ambassadors had returned home for consultations. Crucial treaties, including the Intermediate-Range Nuclear Forces (INF) Treaty and the Treaty on Open Skies, have collapsed. Only the 2010 New START accord was spared, extended in February for five years just two days before it was due to expire.

The governments have set low expectations for today’s talks — an outlook shared by experts, who say the summit will likely yield only plans for further discussions, and perhaps a return of the ambassadors to their posts.

“The fact of the meeting signals some stabilization and even predictability, which were Biden’s stated goals,” said Matthew Rojansky, director of the Kennan Institute, a Washington think tank. “They planned a meeting in April, and now it is happening as planned. It seems like a low bar but think about everything that has happened and that could have happened in those two months to derail this.”

As for the outcome, Rojansky said: “I do think the central takeaway is going to be on strategic stability, a process not an agreement. But through that process the hope is we can address not only what comes after New START, but cyber and other difficult issues.”

Samuel Charap, senior political scientist at the Rand Corporation, said the Biden administration was indeed looking beyond New START, but also to find ways to prevent Russia from being a nettlesome distraction.

“They want stability,” Charap said. “They want Russia problems not to be dominating the agenda. They have bigger fish to fry — having a Russian problem spiraling out of control is not how they want to be spending their time.”

“This relationship has been in a tailspin since 2014,” Charap added. “Is it plausible to hit the floor and make sure we don’t go further down the drain? They are looking to see if they can get that.”

Biden and Putin will spend hours talking to each other. But U.S. and Russian journalists are not supposed to. Under rules negotiated by Moscow and Washington ahead of the summit, media accredited by the White House and the Kremlin are located well apart from each other, on the grounds of the verdant summit site, Parc La Grange.

And there were notable signs of the cultural gulf between the Russians and Americans, who were each responsible for preparations on their own side. As the leaders met under a blazing sun — and temperatures of 31 degrees — reporters accredited by the White House were working in an air-conditioned space.

Those accredited by the Kremlin were sweltering. The Americans had real bathrooms with cloth hand towels; the Russians had portable toilets, with hygienic paper in short supply.

At least for breakfast, the coffee, croissants and mini sandwiches appeared to be identical, supplied by the Swiss hosts.